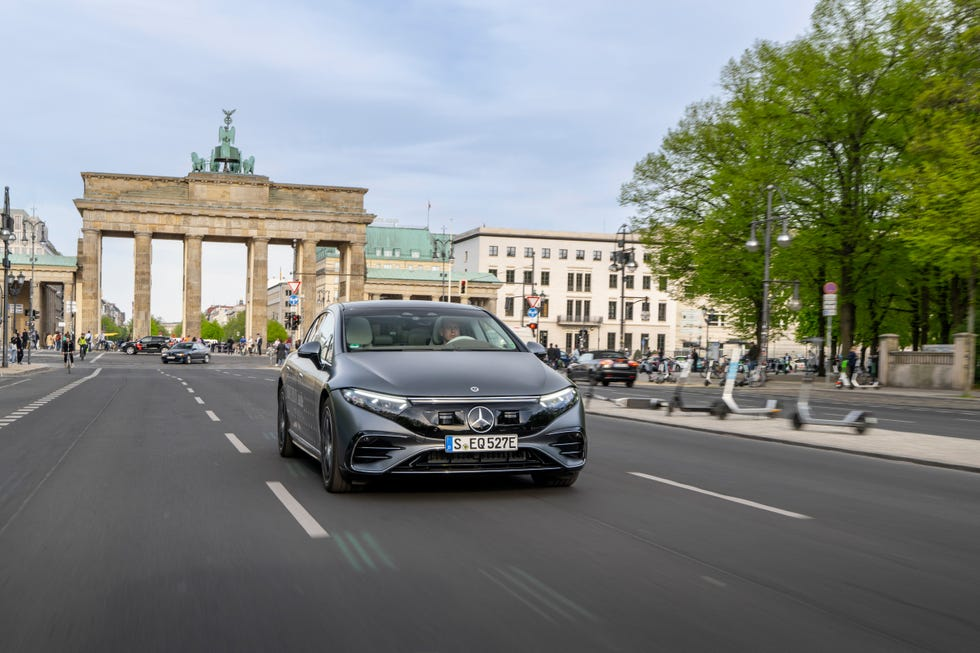 2022 Mercedes-Benz EQS with Drive Pilot: Autonomous on the Autobahn

We travel the world to drive new cars, but not today. Today, we're in Berlin attempting to not drive the Mercedes EQS for as long as possible, while sitting behind the steering wheel. This is the brave new future we've been promised for so long: a self-driving car legally operating on real roads.

Mercedes in Germany is offering both the EQS and the S-Class with optional Level 3 Drive Pilot support for 7430 euro ($7726) and 5000 euro ($5199), respectively. But finding a road that will allow me to deploy the new Drive Pilot is a challenge, owing to the long list of restrictions around its operation.

Although Germany is allowing Level 3 driving automation—on the 1-5 SAE scale that goes from adaptive cruise control to full-Johnnycab robo-chauffeur, this is an "eyes-off-the-road" level of conditional driving automation—vehicles can only do so in very limited circumstances. They must be on one of the nation's 8200 miles of autobahn highway in traffic traveling at no more than 60 km/h (37 mph) in dry conditions and away from tunnels or construction zones.

Which is why the journey starts with me scanning Google Maps to try and find just the right level of stau, as the natives call traffic jams. The first plan to take the A111 toward Tegel is stymied by the fact it has been shut down by an accident. Stop-and-go traffic is one thing, but the EQS won't be able to route itself around the obstruction on surface streets.

The A100 that runs across the south of the city looks more promising, although there are only patches of yellow among the green on the map—and I'm warned that it contains many tunnels, which will limit my chance to experience the system. Who would have thought finding a jam would be so hard?

The legalistic reticence is because Germany has adopted UN Regulation No. 157 on Automated Lane Keeping Systems (ALKS), which lays down the restrictions on speed and also the need to limit operation to divided highways, where pedestrians and cyclists are banned. While most of Europe is set to bring these standards into law, the U.S. is going its own way, with different regulations state by state.

While it's both tempting to think of the Level 3 Drive Pilot as being a continuation of the existing Level 2 system, it's considerably smarter. The existing Drive Pilot has been keeping Mercs in their lanes and a safe distance from other vehicles for several years, and their driver is always in control, at least nominally, and legally responsible if anything goes wrong. Level 3 reverses that equation. Once the car has taken control, it—and in liability terms, Mercedes-Benz—is on the hook for any crashes caused by the system's negligence. 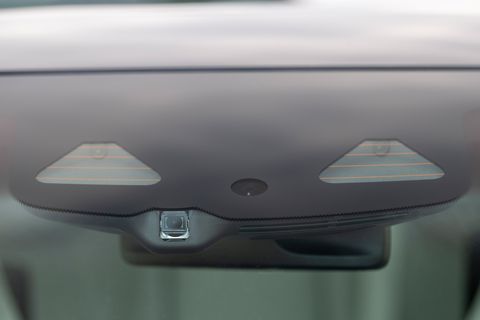 The system requires a much more complex set of sensors. On the S-class and EQS that includes radar, laser-based lidar, a stereoscopic 3-D camera, and short-distance ultrasound to detect the presence of nearby vehicles. Each has different strengths and weaknesses: Radar is good for range and speed but struggles to separate stationary objects, lidar operates at longer range and can readily separate targets (but the sensor is sensitive to dust and spray), and the 3-D camera is great at classifying different types of road users but struggles with backlighting.

That's not all. There is also a moisture detector in the left front wheel well to make sure the road surface is dry, and there's a camera on the top of the instrument display to make sure the driver isn't asleep or obviously incapacitated. Positional data comes from a triple antenna that orientates the car through a combination of Global Navigation Satellite Systems (GNSS), including the USA's GPS, Europe's Galileo, and Russia's GLONASS satellite constellations. The collected data is put through an algorithm that returns positional accuracy better than 3.9 inches. These inputs are then correlated against high-definition mapping—Germany's entire autobahn network has been scanned for this purpose. 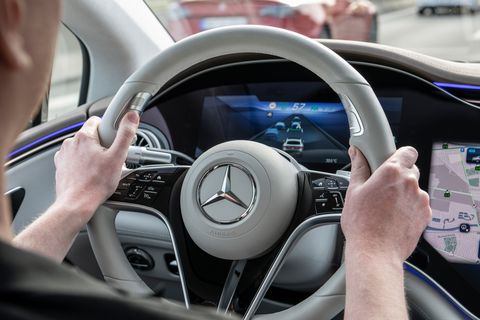 Only if all the systems agree the operating criteria are satisfied do the pair of "A" buttons on each side of the steering wheel illuminate to show the car is willing to take control. Pressing one of these then brings up a legal-disclaimer warning on the dashboard, which needs to be clicked away each time to satisfy the lawyers. Turquoise lights above the main control buttons then show the car is driving itself.

I've been using the lesser Level 2 system on my way to the autobahn, the EQS steering, accelerating, and braking on its own as my hand rests on the steering wheel, so switching to the fully automated system in the first patch of slow-moving traffic feels like anticlimactic. Yet the car is now in charge and must give me 10 seconds of notice if it wants me to take over driving. The car then takes up to another 10 seconds to gradually bring itself to a standstill and activate its flashers if the driver fails to respond. 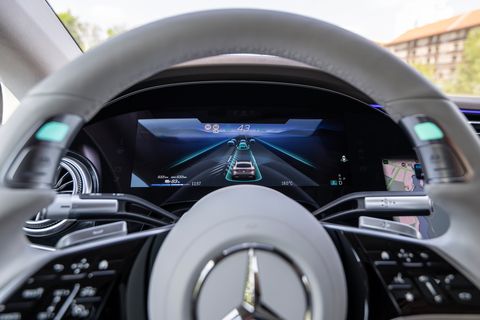 Despite being liberated from the need to pay attention, it's surprisingly hard to look away from the road for more than a few seconds. With the turquoise light on, I'm able to legally look at my phone—normally a big no-no in Europe—or to use the center display to watch videos or live TV. Mercedes has even installed a suite of games, although trying to play sudoku on a touchscreen in slow traffic doesn't feel like I'm making the most of my liberated time. I end up mostly looking at the dashboard display, which shows the vehicle Drive Pilot is following overlayed with an "A." The sentinel camera prevents me from attempting to snooze; closing my eyes for a couple of seconds produces angry beeps and the immediate start of the hand-back sequence. Drivers also aren't allowed to recline the seat all the way back or motor it too far away from the pedals to ensure they can readily resume driving if called upon by the system.

The hand-back sequence from car to driver is forcefully Germanic, escalating rapidly from a polite ping to a red flashing dashboard display and then a shaking of the seatbelt. Had I failed to respond, the car would have stopped in a live autobahn lane, so I didn't try that. The approved method for retaking control is to press the "A" button again, but any other control input should also do it.

I experience the hand-back sequence repeatedly, rarely getting more than half a minute under automated control. This is largely because traffic speeds up beyond 60 km/h or the vehicle the system is following moving out of range. But tunnels or big overpasses and construction zones or narrowing lanes have the same effect. Even so, the Mercedes engineering team says the record in Germany for continuous use during the development program is well over an hour. 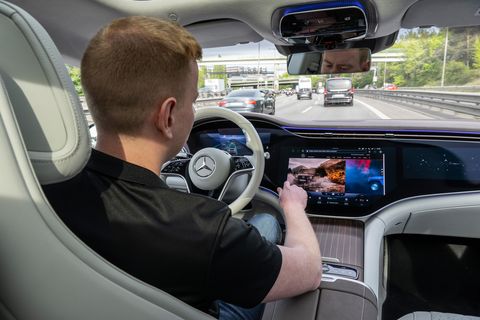 Nor can the Level 3 system change lanes, even in response to instructions from the navigation system—this is also prevented by the current regulations. But it can move over to create a pathway for emergency vehicles, something it does in response to hearing sirens approaching from behind.

Mercedes has won the race to a production implementation of Level 3 driving automation, but in a sensible and unexciting way. It's hard to imagine too many S-class and EQS owners following the free-wheeling experimentalism of those Tesla owners who film themselves putting what often seems to be excessive faith into that company's dubiously more permissive Level 2 system.

There is no doubt that Drive Pilot is capable of safely handling greater speeds and freer-flowing traffic, the question is when it will be able to do so on public roads—or, indeed, when it will be able to operate at all in the U.S. Given the current restrictions, it feels more like a neat trick than a transformational change unless, of course, you have a predictably tedious slow-and-go freeway commute.