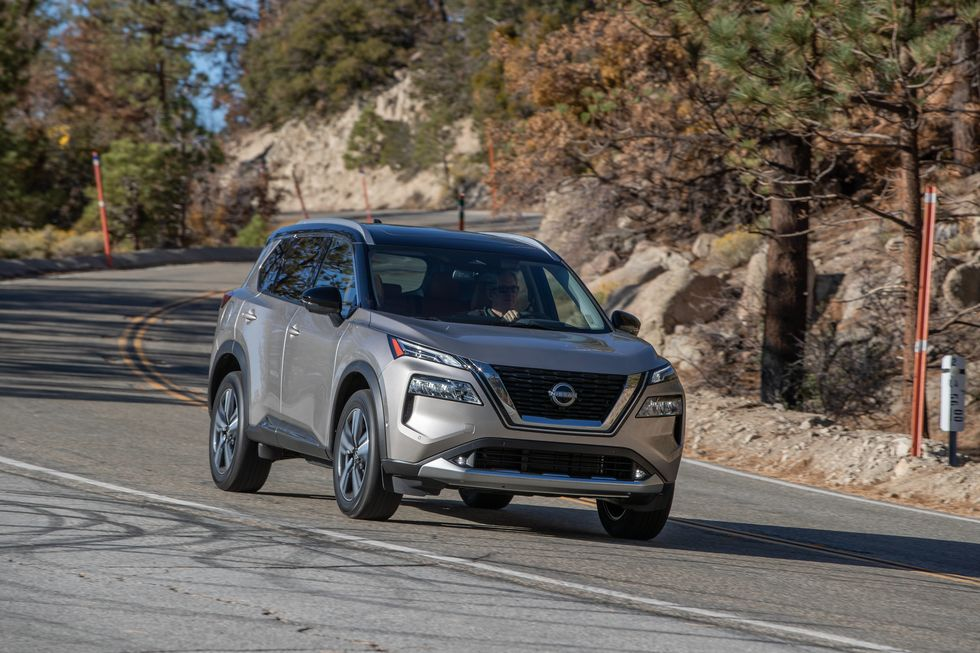 A lot of people probably don't know—or care—what's under the hood of their daily driver. If it gets them where they need to go and delivers decent fuel economy, who cares how much horsepower the engine has or what type of transmission it uses? Well, credit Nissan for caring because one year after the company introduced a fully redesigned Rogue, it has swapped the compact SUV's indifferent 2.5-liter four-cylinder for a punchy turbocharged three and paired it with a new continuously variable automatic transmission (CVT). Not only does the updated powertrain make the 2022 Nissan Rogue quicker and more powerful, but it promises better fuel economy too.

One of our few gripes about the new-for-2021 Rogue was the so-so performance of its naturally aspirated 2.5-liter inline-four. With only 181 horses and 181 pound-feet of torque, the engine was among the weakest in its class and provided unremarkable acceleration. Most vehicles in this class offer more than one powertrain choice, including turbocharged engines or hybrid options, but the redesigned Rogue retained its one-size-fits-all approach to propulsion. And while that's still the case, the Rogue's new prime mover is the latest iteration of the company's innovative, albeit complex, variable-compression-ratio turbocharged engine. A 2.0-liter VC-Turbo inline-four first appeared in the 2019 Infiniti QX50 before also powering upper-crust versions of the Nissan Altima. 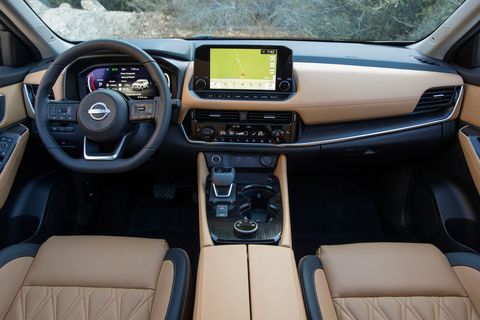 The VC-Turbo's ingenious mechanism to move the crankshaft slightly allows the engine to adjust its compression ratio on the fly, between 14.0:1 for maximum efficiency and 8.0:1 to enable max boost. The Rogue's new 1.5-liter three-cylinder is basically the Altima's 2.0-liter with one cylinder lopped off.

This new, smaller three-cylinder variant generates 201 horses and 225 pound-feet of torque, which is 20 horsepower and 44 pound-feet more than last year's Rogue and 47 horsepower and 48 pound-feet fewer than the Altima's 2.0-liter version. Notably, the Rogue's VC-Turbo makes those peak-output figures on regular 87 octane rather than pricier premium fuel. To compensate for the newfound torque and quell any three-cylinder thrash, the 1.5-liter gets hydraulic engine mounts. The other new addition is Nissan's latest Xtronic CVT with a wider gear-ratio spread (increased by 17 percent to 8.2), reduced friction (down 32 percent), and a twin oil pump system that's designed to increase fuel economy and, during aggressive driving, improve shift responsiveness. 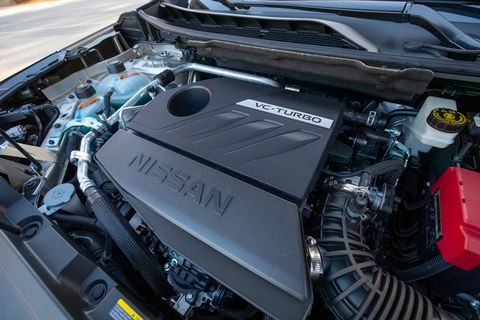 Compared with the old 2.5-liter, the VC-Turbo makes the Rogue feel considerably peppier underfoot. Despite the 2021 Rogue's class-competitive 8.2-second sprint to 60 mph, the previous powertrain felt relaxed to the point of lethargy, particularly during passing maneuvers. We'll compare subjective opinion to objective results once we get one to the track, but we expect the new Rogue to knock about a half-second off the zero-to-60-mph time. Numbers aside, there's now a reassuring wave of torque that peaks at 2800 rpm and continues up to 4000 rpm, fattening up the midrange response. The new Rogue delivers its power more quickly, if not always more linearly. Mashing the throttle reveals an initial hesitancy before a sudden surge of thrust; with variable compression and a continuously variable transmission, there are a lot of variables to align before your throttle input translates to action. Prolonged time with the accelerator near the floor elicits a dull roar underhood, but otherwise, the cabin is a hushed and spacious place. 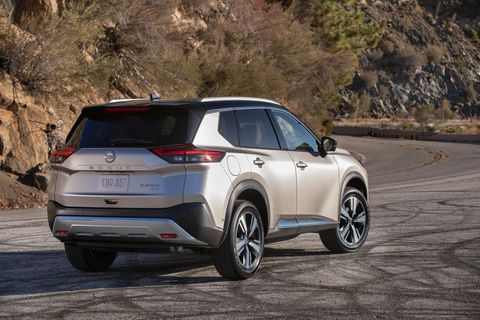 Along with its increased power, the downsized engine also delivers better fuel-economy figures. With EPA ratings as high as 33 mpg combined—Nissan wouldn't yet elaborate on city or highway values or with all-wheel drive—the front-wheel-drive Rogue improves on its predecessor's numbers by about 10 percent. For comparison, nonhybrid rivals such as the Honda CR-V and Toyota RAV4 both top out at 30 mpg combined. Since our drive route was limited to roughly 30 miles of mixed driving on the streets and highways around Detroit, we'll need an extended test to evaluate the Nissan's real-world mpg. (In the case of the Infiniti QX50 with the VC-Turbo, our observed mileage in our 75-mph highway test fell short of the EPA numbers, 27 mpg compared to 30 mpg EPA highway.)

The short trip did allow us to appreciate the Rogue's all-day-comfortable driver's seat and the top-of-the-line Platinum's rich-looking interior. We're happy that wireless Apple CarPlay comes with the larger 9.0-inch touchscreen, but Android Auto still requires a wire, and we're not impressed with the display's low-res graphics. Plus, the built-in navigation system got us lost.

The 2022 Rogue arrives at dealerships in January. All models cost either $650 or $750 more than their 2021 counterparts (depending on whether they're front- or all-wheel drive), which equals a price range of $27,875 to $39,155. We doubt that too many crossover buyers will appreciate the technical wizardry of variable compression, but all of them should recognize that this clever new engine puts the Rogue driving experience more in line with the promise of its name.