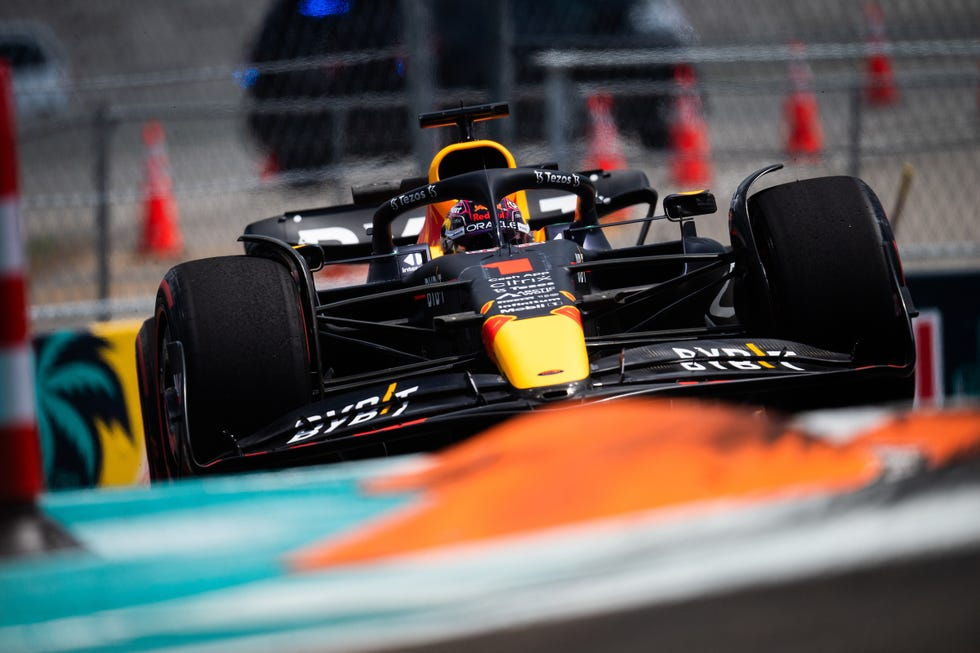 Formula 1 is experiencing a revival in the United States. The highest tier of motorsports just finished a sweaty weekend in Florida at the debut of its newest star-spangled circuit, where the May 8 event was the first F1 race in Florida since the Sebring Grand Prix in 1959. It was a melting pot of sunburned and celebrity guests from paddock to pretend marina, with an energy that was absolutely nuclear.

Built from the parking lot of the Miami Dolphins' Hard Rock Stadium, the 3.36-mile street circuit has 19 turns and a super-long straightaway section where cars reached speeds as high as 214 mph on race day. Miami joins Circuit of the Americas in Texas as the only U.S. tracks currently on the F1 international schedule. A third race will be added next year once the high-speed street course along the Las Vegas strip is constructed for November 2023.

Jamey Price was recognized as the Motorsport Photographer of the Year in 2019 by the National Motorsports Press Association. Price has had his camera pointed at race events such as the 24 hours of Nürburgring, Kentucky Derby, and series such as MotoGP, World Endurance Championship, IMSA, NASCAR, and over 35 Formula 1 races. Jamey Price

Celebrities flocked to this event like gulls at the port. The paddock saw celebrity guests including Michelle Obama and Michael Jordan. For a few minutes, David Beckham juggled a soccer ball with Ferrari driver Charles Leclerc, who was doing his best not to scuff the soccer champ's cream-colored suit.

After the race was over, we asked photographer Jamey Price, who has been capturing the motorsports world professionally since 2008, what Miami F1 looked like from his side of the lens. Price, who told us he had shot over 792 gigabytes of images that weekend, was still trying to rehydrate.

C/D: Who were you shooting for?

Price: Some of my images are being used by Alpine F1 and some by Rolex, but my biggest clients were racing in the Porsche Sprint Challenge support series. Plus, I shot for Multimatic, which provides suspension parts for Red Bull Racing and Scuderia AlphaTauri. It ended up being very busy, handling both series.

How do you know where to photograph on a track that didn’t exist until just a few weeks ago?

The trick is to walk the course in a counter-race direction. You have to see what the car looks like coming at you. Walking the track gives you a sense of how close the walls are, the racing line, and where the photo holes are. You can study onboards and simulations of cars on the track as long as you want, but you won't gain enough from those until you get on the ground and walk it. Sometimes you'll get there with a plan, and then maybe the light doesn't work or the background doesn't work, so you throw that plan out and adjust accordingly.

If you look closely at parts of the course, they remove sections of the fence for us to poke our lenses through. You can shoot through a fence, but it can get in the way depending on what you're trying to capture.

VIEW PHOTOS Jamey Price Is your technique more methodical than experimental when under the pressure of photographing a new track?

It's important to get the basic shots, sort of like the boring version, but you still want to try the creative stuff. A few years back, Formula 1 reduced its practice time to an hour each, which sounds like a lot of time, but you sacrifice a lot of the practice moving between the most interesting spots in Miami. The walk can be too far to be worth it.

There's definitely room for improvement, which is true with any new track. As it matures and ages as an event, the photographers will be able to suggest areas for more photo holes or access. There are so many places I would've liked to have shot but just couldn't reach.

Does your gear change between events like Formula 1 versus the Kentucky Derby?

I keep it the same. It doesn't matter if I'm shooting IMSA, NFL, or F1, I like using the same gear no matter where I travel. Even if I end up never using it, at least I have it there when I do.

Did you keep track of your steps?

I walked about 36 miles from Thursday until Sunday. I barely used the photo shuttle, so it was mostly walking under the scorching Miami heat. It was like 22,000 steps a day or so.

VIEW PHOTOS Jamey Price What was your favorite part about the Miami Grand Prix?

From what I felt and saw on the ground, there was a lot of great energy. I've never seen the paddock so busy. It was just wild. VIPs, media, teams. Even though the race wasn't amazing, the event itself was really spectacular. In any street circuit, the proximity you have to the cars is just crazy. They're only a couple of inches away from you in certain spots.

The paddock was a bit of a Met Gala at times with the number of celebrities. What were you wearing?

A bunch of sunscreen. Two cameras with a lens on each. And a belt bag with more lenses and some of those recyclable aluminum water bottles to help cool myself off. I'm normally in a long-sleeve fishing vest with lots of pockets.

What were your weapons of choice out there?

Mine didn't, but a friend's camera overheated and stopped working. Hopefully, next year is a little cooler.

How many gigabytes of images did you shoot?

792 gigabytes. I immediately upload the photos onto a hard drive, then that drive gets backed up again on the cloud, and again later on another hard drive.

VIEW PHOTOS Jamey Price Was there a shot you didn’t get?

Not really. I typically research what other photographers got from the weekend to see if I missed any angles or areas, but other than a few corners I didn't have time to run to, I feel good about what I shot.

What corners were those?

The outside of the tight chicane near turns 14, 15, and 16. I was able to shoot driver's left, but I'd like to see the perspective from driver's right next time.

I just root for good racing. The saying, "once you see how the sausage is made," is sort of true. I will say that when Max wins, he's not very animated. It's not that I'm rooting against him, but when Lewis wins he jumps out and shakes his fist. That's what we want to see as photographers. In Miami, Max was tired and exhausted from the heat when he got out of the car, but even when it's not he's not very animated. If someone like Fernando Alonso won, Hamilton, or when Sebastian Vettel used to win, there's more of a feeling of celebration and joy. Max is more reserved.

VIEW PHOTOS Jamey Price Is there a driver who's camera shy?

Lewis is very media savvy. He walks in each morning dressed in very colorful cool clothes, but he's very hard to pin down. And that's because of his success, right? When Lewis walks into the paddock he's being followed by Netflix, TV crews, camera guys, and fans. He basically has to run from point A to point B to avoid it. In Miami, he came through the paddock on his scooter super fast while his bodyguard was at full sprint behind him. Without putting a foot on the ground he went from the Mercedes hospitality suite to the garage, into the garage, and disappeared. The only time you really see him is when he's doing required media time or the walk into the track in the morning. He just never stops.

Where are you going next?

IMSA's Mid-Ohio is next weekend, but I'm taking the week off to be a dad. If I didn't, I'd be eight weekends on the road in a row. I'll be back to shoot the SRO series in New Orleans, Monaco for F1 again, then Le Mans 24-hour, and then back to Montreal for another F1 race.

Related Stories Formula 1 Cancels 2022 Russian Grand Prix in Sochi VW Boss Says Audi and Porsche Will Join Formula 1 This commenting section is created and maintained by a third party, and imported onto this page. You may be able to find more information on their web site.