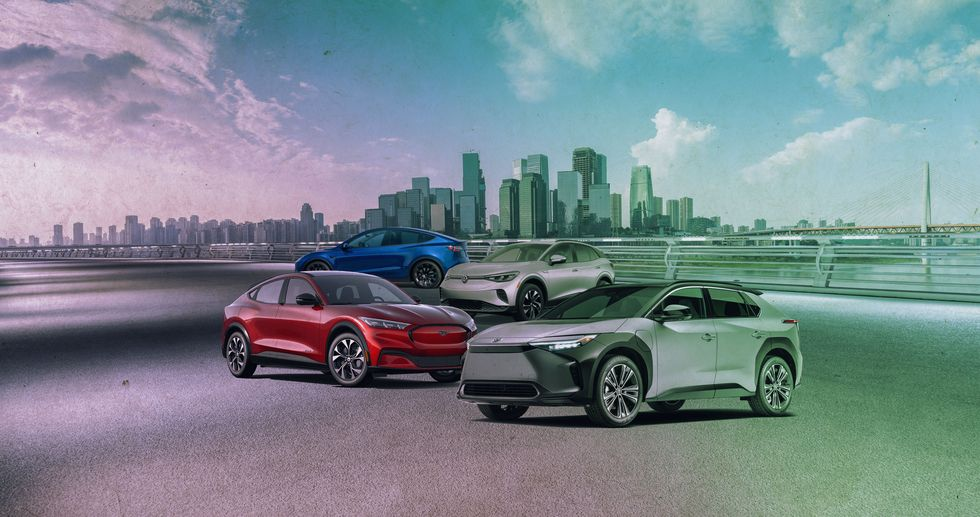 How the 2023 Toyota bZ4X Compares to other EV Crossovers

American consumers want crossovers, and automakers are adding electric vehicles to their lineups, so it only makes sense for them to offer electric crossovers. Toyota's bestseller in the U.S. is the RAV4, so it's no surprise that its newest electric car, the upcoming 2023 bZ4X, nearly resembles the vehicle it sells the most of. Toyota isn't the only automaker doing this; others have already added electric crossovers to their lineups. So when the bZ4X arrives next year as a 2023 model, it'll have some competition from the Ford Mustang Mach-E, Tesla Model Y, and Volkswagen ID.4, which are all on sale now.

Range is the all-important number when it comes to EVs. The bZ4X offers the least amount of range of the group, based on Toyota's initial estimates (official EPA numbers have yet to be announced). Toyota says that front-drive models will reach 250 miles on a single charge, but we expect the all-wheel-drive model's range to be closer to 200 miles, though Toyota has not yet given an estimate. The other electric crossovers have more range, with the Volkswagen ID.4 offering up to 260 miles, the Ford Mustang Mach-E up to 305 miles in its California Route 1 trim, and the Tesla Model Y up to 326 miles in its Long Range AWD model.

Toyota has two lithium-ion battery packs for the bZ4X. Front-wheel-drive models use an approximately 64.0-kWh battery pack and a single electric motor making 201 horsepower, while all-wheel-drive models have a roughly 66.0-kWh pack and two electric motors combining for 215 horsepower. The Mustang Mach-E has either a 68.0-kWh or 88.0-kWh lithium-ion battery pack and anywhere from 266 to 480 horsepower on the high-performance GT model. Tesla also offers a high-performance Model Y Performance model along with the Long Range, and they both use a dual-motor drivetrain. The battery pack on the Long Range is 77.7 kWh, and the pack on the Performance is 81.1 kWh. VW ID.4s use a 77.0-kWh pack with either single-motor rear-wheel-drive or dual-motor all-wheel-drive setups.

All bZ4X models come standard with a 12.3-inch touchscreen using Toyota's simplified new Audi Multimedia infotainment system and a digital gauge cluster mounted high above the steering column with a shift dial. Mustang Mach-Es have a 15.5-inch vertically oriented touchscreen with Apple CarPlay and Android Auto and Ford's universal shifter dial. The Tesla doesn't offer either of those connectivity features, but it uses a 15.0-inch touchscreen and a steering column-mounted shifter. Volkswagen offers either a 10.0-inch or 12.0-inch screen on the ID.4, and wireless Apple CarPlay and Android Auto are standard.

Toyota has yet to release pricing details for the new bZ4X electric crossover. Only XLE and Limited models are available at launch, and we expect the XLE to start at approximately $37,000 when it goes on sale next year. Whatever the bZ4X costs, it'll need to compete with the Mustang Mach-E's $43,995, the Tesla Model Y's $59,190, and the Volkswagen ID.4's $41,190 starting prices.