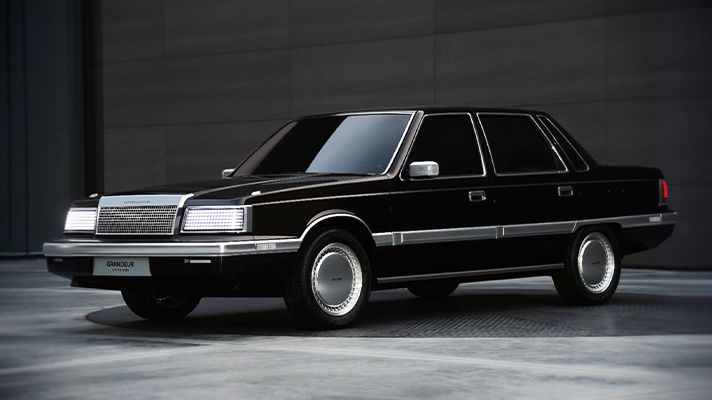 One of the coolest cars we have seen this year was the Hyundai Pony Heritage Series, a thoroughly reworked and upgraded first-generation Pony from the 1970s fitted with an EV powertrain, ultra-modern LED lighting units, and a nixie-tube dashboard. The Pony was created for an internal design lounge in 2020, and now it has happened again: A similarly restomodded Hyundai Grandeur sedan has appeared in the same showroom, right next to the iconic Pony.

The Grandeur is an interesting choice to receive this treatment. U.S. customers received later iterations of this large sedan, first as the XG300 and later as the Azera, but the first-generation Grandeur is more obscure. Developed together with Mitsubishi, it was also called the Mitsubishi Debonair in Japan. In Korea, it was intended to take on Daewoo's top models and to provide aspiring Hyundai with a flagship model.

While the Grandeur failed to distinguish itself from its competitors back in its day, its rebirth in Hyundai's showroom in 2021 shows us how timeless the clean lines of the 1980s feel today. The car appeals not just to those that remember the first-generation Grandeur, but also to those spellbound by retro-futuristic style.

Outside, the Grandeur's conventional lights make way for multi-pixel LED lights, which illuminate in different patterns up front and in the rear. The grille has been redesigned and loses the hood ornament that graced some versions of the original Grandeur. The wheels, mirrors, and moldings were also reimagined in a futuristic style.

While the exterior has been upgraded and modernized, the interior is entirely redesigned but still uses styling cues and materials reminiscent of the 1980s. There is a single-spoke steering wheel with additional knobs on the left and right; the upper dashboard is an entirely new, horizontal screen; and the infotainment system features a vertical display on the center console.

The four lounge chairs are clad in velvet, a material that has long gone out of fashion but one that could soon make a comeback in luxury cars. The seatbacks are covered in leather. Storage spaces are designed with the look of expensive hand bags, and the audio system, co-developed with Korea's leading instrument maker Samick, sports 18 speakers and two subwoofers. Also, the audio display resembles a piano.

Hyundai has taken great care to create a unique lighting experience inside: Two light rays, emitting from both sides of the dashboard, highlight the B-pillars and illuminate the entire interior. Infinity mirrors add a further elegant and unique accent. And the bronze illumination is supposed to evoke the look of vintage hi-fi systems.

For good measure, the original gasoline drivetrain has been entirely replaced by an EV powertrain. No wonder the team, led by Sang-ah Ko, Lee Dong-won and Woo-soon Choi, invested a full eight months to complete the impressive project.

The Pony and Grandeur projects highlight a shift in Hyundai's strategy, initiated by chief designer Luc Donckerwolke. While Korean carmakers have traditionally focused on future models, they are now, for the first time, looking back at and celebrating their own history. While we are curious which further cars will get the Heritage treatment, we are even more interested in a practical question: When can we order this Grandeur EV from Hyundai?